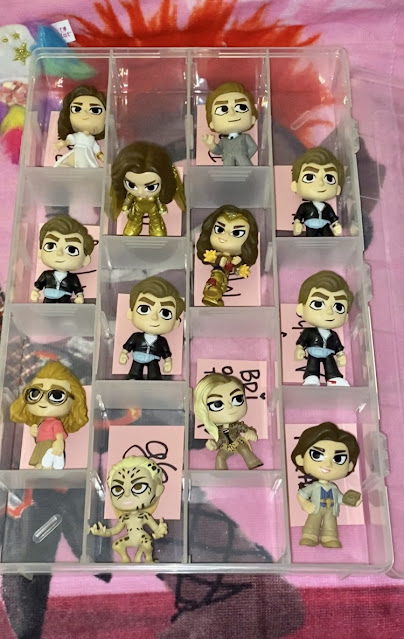 Includes the rare Maxwell Lord, Barbara Minerva & Cheetahs, and Diana with artifact. The G6 Group got these in their stockings Christmas 2020.

Three of the guys all wanted Steve Trevor with Fanny Pack, so we found two more online.

And they have one more Wonder Woman in gold armor that doesn’t fit in the case: 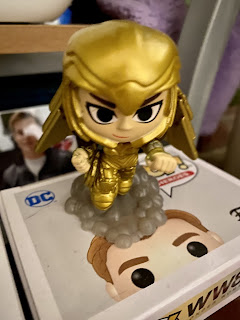 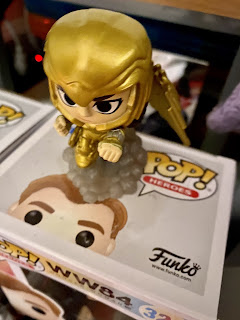 They are using a bead/jewelry-making case from Michaels to protect and display them, with each G6er’s name behind their Mini. 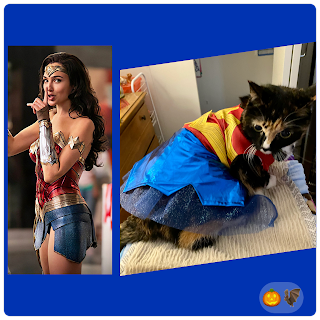 Posted by team chaos at 6:23 PM No comments: 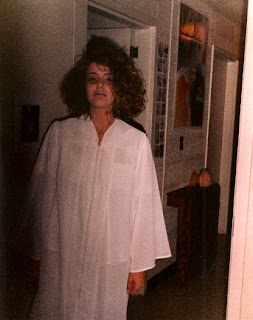 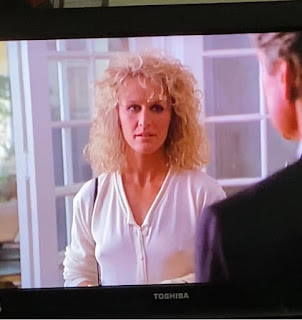 I’m dying over here - we watched Fatal Attraction and the 1988 teased up perm that I had freshman year at UofR was everywhere! Then I noticed both female leads wore the exact shiny gold/shiny & light pink/shiny lipstick that I still wear everyday now (that I’ve been known to say “I’ve never seen anybody else at all wear this shade I like”) apparently, it’s from 1987!
Then I remembered my H’ween costume from 1988. I was the ghost of a murder victim. And today I realized that I looked almost just like the Fatal one herself! LOL Oh 1988 lol you crack me up!
Want to see the complete picture from that Halloween it’s at http://theg6group.com/masque.html
👻 🔪🔪
Posted by team chaos at 6:39 PM No comments:

Hi it’s me, I’m Bri. Mom had new slides from Adidas and I helped get them ready by posing some with them! 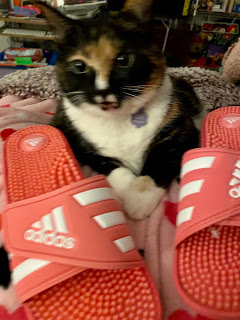 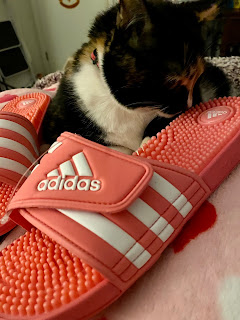 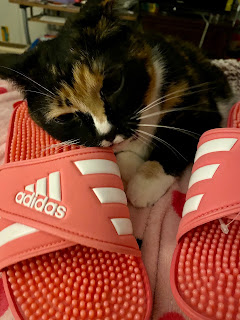 I love you!
From Bri Marie
Posted by team chaos at 6:17 PM No comments:

Here's a great Enrichment idea for zoos and sanctuaries, and other places with captive animals!

A "giving tree" where patrons can choose a gift to give to an animal of their choice! At the Milwaukee Zoo, visitors can buy the item and bring it in, or donate the money and let the staff do the shopping.

Visitors can select an ornament from the tree, which features an animal enrichment request from the zookeepers such as a food treat, toy, gift card or monetary donation.  The enrichment is used throughout the year to enhance all aspects of the animal’s welfare by addressing the behavioral, environmental, physical, psychological and social needs of the species."

Enrichment changes the entire lives of these animals. I was part of very early enrichment research at the San Francisco Zoo, and a sad, depressed, anxiety ridden black leopard named Sabrina went from not-okay to flourishing! by the introduction of a hunting game device which mimicked bird noises and passed out treats of chicken if she hunted it through every zone the noise went in. She calmed down, got happy, and felt like a leopard again. But not completely - until they also gave her trees, climbing branches, and hiding spots! All enrichment! She actually smiled!!

Great apes (with hands like ours) are using iPads - NOT KIDDING! It's incredible. We owe it to the animals to let them learn, play, develop, and keep healthy! 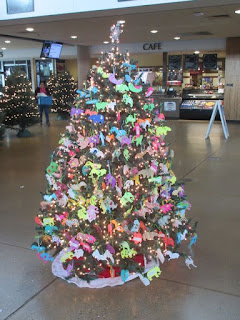 For more information on Enrichment, visit our page
theg6group.com/enrich.html

Posted by team chaos at 9:38 AM No comments:

Cats, dogs, small pets like ferrets and hamsters... they all love dressing up for Halloween. Or they can, that is, if you treat them like they need to learn what it's all about; much like you start with your human kids when they are mere babies. You know those first few years, they fuss and try to pull off their Winnie the Pooh hoodie costume, lol. But within a few years, they know that costumes are for fun, and that... treats come after they put it on! Don't forget the fun and the treats. Please don't do it just for you. If they are afraid and squirm, giggle and have fun with them, but never at their expense! We started out about 2009 with some of the very first pet costumes that were in the stores - Target had little pumpkin hats, and funny chicken hats for our cats. The first year it was wildly funny, they were like WTF is this! Lol. Show them what they look like in the mirror (they can see themselves). It's funny, and kiss and hug them. And don't make them keep it on for too long, ok? Each year after that, it has become more and more elaborate - just like with the human kids in costumes out there. After they got used to the costume part (with a fun toy and a food treat following it), we added in "going trick or treating!" Best for pets is to do this strictly indoors only (because it gets too hectic out in the neighborhoods on Halloween!). We used other rooms in the house as the rooms they can go to, help them get there (carry cats and smaller pets, too). Knock on the door for them. Holler 'trick or treat' to whatever friend or family member you have over to be the person who answers the door for them. After the regular oohs and ahhs at how cute your pet family member look in their costumes, give them a safe treat baggie. Some snacks or some toys, or a nice new blanket. Each year it will become more normal to the pets (easier for them) and they'll be able to wear more complex costumes. Find pet costumes at PetSmart, Petco, Target, Walmart, Kmart, Michaels, Party City, and more! PS. Please use common sense with their costumes. Nothing covering their nose and mouth so they can breath! Nothing with big strings that could wrap around their necks, or beads and stuff that could choke them. Not all of the pet costumes are made with safety in mind.


Here is a gallery of our pet family's Halloween fun over the years:

Here are a few to get you started :) But there are many more pics, tips, and ideas over at our Pet Fashion Show page, so please do stop by and check it out. Happy Haunting! Have a Bootiful Halloween this year! xoxo! Love from the Stahlmans! 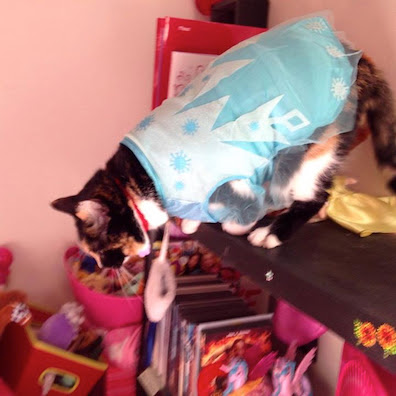 Disney Frozen's Elsa for cats and dogs from PetSmart Halloween 2015 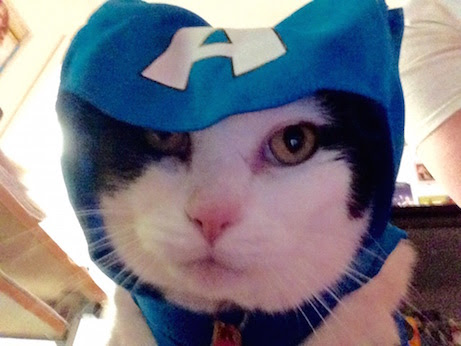 Marvel's Captain America for cats and dogs from PetSmarts Halloween 2015 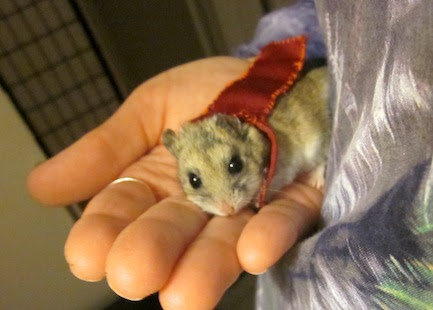 Hand-make your small pets' costumes with safety in mind. Use velcro for break-away loops. This one is Harley the Kid's Thor Costume from 2012. Part of the Heroes by H line of designs from our own family band, called The G6 Group 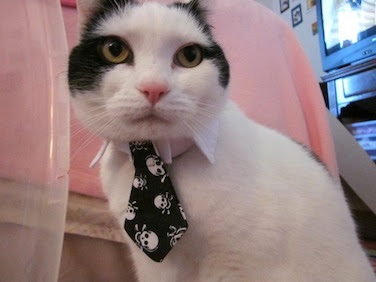 Velco neckties from Petco and PetSmart make a safe, and easy style costume that many pets can wear, since they are already used to having collars around their necks! 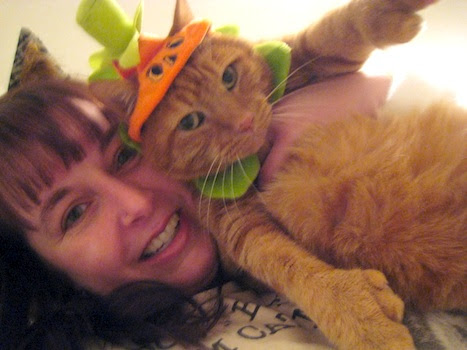 Reggie Max and our very first Halloween Pumpkin. From the early years of pet costumes! This one was from Target's pet department. Make sure to check pet sections at the big chain stores, and also check in their regular costumes section. (They put pet costumes in both areas nowadays) 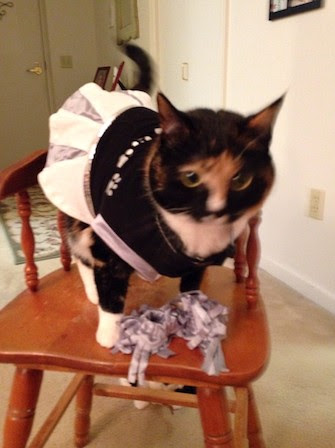 Our own cheerleader! It's Brianna Marie from Halloween 2014. Talk about holiday "spirit" lol. Isn't she something! This was from Target. Costumes with tank-sleeves like this are often easier. (The way cats and dogs sit often pull their arms in from longer sleeves, try tanks instead if you have the sleeves problem :) 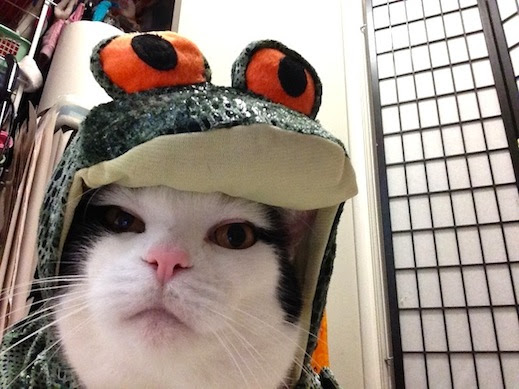 Our Apache does the best animal impressions! Here's his 2013 Frog. It was TopPaw from PetSmart that year! This year he's going to be a skunk, that little stinker lol. 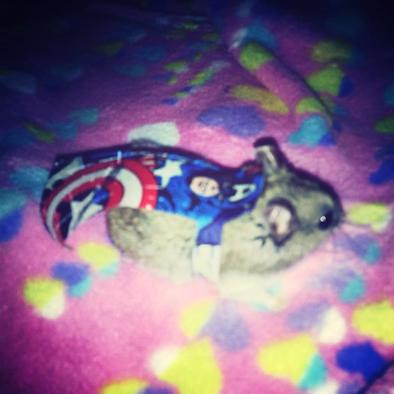 Mommy's choice of pics is our Harley the Kid as Captain America in 2013! Another of our Heroes by H costumes! Avengers Assembled! 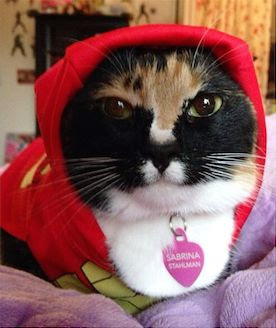 It's Pepper Potts from Iron Man 3, wearing one of the Iron Man suits! Bri found this Iron Man suit at PetSmart and made the most perfect Pepper Potts. Cosplay or Halloween, costumes make great family fun. 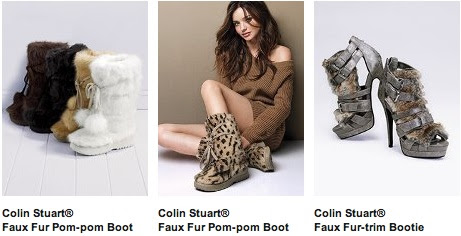 when fatima rings the dinner bell

with my honey at the head of the table
I serve the sunday dinner
for 3 or 15 depending on how many arrive that day
macaroni, most served
with sauce stirred all morning
sprinkled with parmesan
with nothing in it for me, and her,
with just meatballs for those 3
and with sausage and pepperoni for the guys over there.
and just scrambled hamburg for the littler two.
and in this circle of peace and eating
comes in the door
the love of my grandmother
who wants my world to be...
alright, no matter what hurt arises.
because we are together
in a good family. 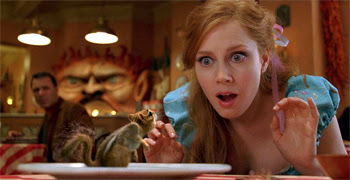 in honor of my grama's dishes that I inheritedrecently; that she always used to serve ussunday dinner on. now :) they are mine!

from the homepage of the G6Group, called Merovence:
http://theg6group.com/tigertails.html
Posted by team chaos at 11:17 AM No comments: 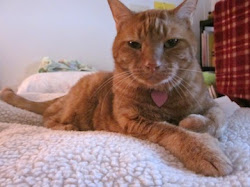 Following the adventures of Team Kitten Chaos through its journey into Dagobah, out behind the Endor moon, and right into your living room.

More team, more links, all of the time!